As a local to Orlando, I am always excited when Disney World adds something different to its food and beverage offerings. This month, the new Tutto Gusto wine cellar opened in the Italy Pavilion at Epcot, and I love the feel of it. Different from other bustling restaurants in the Disney parks, the atmosphere at Tutto Gusto provides a place for visitors to relax and sip wine with good friends. The rustic wine cellar has a luxurious feel, with wall hangings, marble and chandeliers direct from Italy.

Tutto Gusto's menu of over 200 Italian wines includes the 2009 Merlot San Giuseppe and the 2010 Rose Regale Banfi. I am also impressed with the extensive menu of small plates and desserts that pair perfectly with wine. Selections include: Prosciutto di Parma, Sopressata (lightly smoked, sweet pork sausage), a wide selection of Italian cheeses, and Cozze (mussels, white wine and tomato). You can also order full-size portions of Tutto Gusto's pastas, including the Gambretti, which includes shrimp, chili and garlic. Although it may sound simple, you need to try the eatery's Panna Cotta al Limoncello, with amaretti cookies and raspberries. The chefs really got this one spot on.

If I was a kid, I think my dream hotel stay would be at Walt Disney World Orlando's new Art of Animation Resort. The resort- which opens in phases starting May 31 - features rooms and special suites around four different Disney movies: Finding Nemo, Cars, The Lion King, and The Little Mermaid.


You can tell that the resort is unlike any other Disney property as soon as you walk up to the Finding Nemo wing: a mammoth Nemo sculpture greets visitors and the exterior is painted to represent an under-the-sea feel. In the Cars wing, a "freshly paved" road leads to the Cozy Cone Motel that includes a pool and cone-shaped cabanas. The rooms and suites represent each movie's storyline too, with details such as bubble ceiling lights in the Finding Nemo rooms and Zazu headboards in The Lion King suites.

The new resort also features Walt Disney World's largest resort swimming pool at 11,859 square feet. Of course, the pool area stays true to the move themes with a giant-sized Mr. Ray and a Squirt statue in the children's play area.

Rates at the new Art of Animation Resort start at $248 per night for a suite that sleeps up to six people. If you are looking for another Disney hotel option this summer, check out Disney's Florida resident rates at select hotels here: http://di.sn/19I. For example, Disney’s All-Star Sports Resort is available for $104 per night from from June 14 – August 4.
Posted by Christine Blank 0 comments

The Charlotte Harbor area of Florida - which includes Punta Gorda and several Gulf of Mexico islands and beaches- is a hidden treasure trove of beautiful scenery, great fishing and other outdoor sports, and some very good eats.


As we near summer, I am thinking of three-day weekend trips near Orlando, and Charlotte Harbor is on the list. The eateries in the area have developed their own culinary style, and the food is amazing. In downtown Punta Gorda, locals know about Peace River Seafood, a longtime seafood wholesaler and restaurant which cooks the fresh seafood catch from local fishermen daily. They may still have an "All You can Eat" crab special for $20! Rum Bay Restaurant, inside the Palm Island Resort on Palm Island, is another casual seafood-focused restaurant that gets great reviews. I feel like I am back in the Keys with menu items like Key West Conch Fritters, Fried Grouper Cheeks, and Key West Conch Chowder.


On the other end of the spectrum, The Perfect Caper in Punta Gorda is a James Beard-nominated restaurant with upscale dishes such as Roasted Butternut Squash and Ginger Soup, Pan Crusted Sea Scallops, Miso Irish Salmon, and Duck Salad. The recently-opened Opus restaurant and wine bar in downtown Punta Gorda is also getting rave reviews. I recommend the bouillabaisse, the Pan Roasted Duck Breast, and any of the fresh fish dishes. Opus also changes its specialty dessert menu every evening, so you can always go back and try something different!

Should You Try Maitland's New Restaurant? 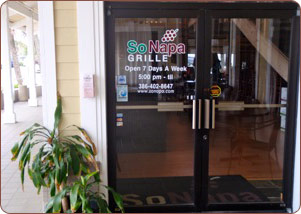 After driving by the fairly new SoNapa Grille restaurant in Maitland several times and wondering what it was like, I was anxious to try the Italian and American food there.


Known for its wine selection, flatbreads, and flame-grilled meat and seafood, the upscale casual eatery serves lunch and dinner in Maitland, in addition to dinner at its New Smyrna location. While SoNapa does not have a huge menu, there were a few good things to choose from. We ordered the Healdsburg Chicken Ravioli, which is a handmade ravioli topped with an alfredo-tomato sauce. This is definitely one of the best dishes to order there. The ravioli could have used a little more flavor, but was very light and unique. The Dutton Ranch Apple Chicken Salad also was not as flavorful as I thought it would be, and a couple of ingredients were mistakenly left off the plate.


SoNapa's atmosphere is upscale, sporting white tablecloths and candlelight. However, the atmosphere and food is not worth the prices. The ravioli, for example, is $14 (Macaroni Grill is still my local favorite for Italian food at those prices), and SoNapa's signature entrees range from $14 to $20 each. Perhaps if I was more of a wine connoisseur, I would simply enjoy a glass of wine and a flatbread for $9.


If you have dined at the restaurant, please let me know if you agree with my review in the comments section below. Where: 640 South Orlando Ave., Maitland.
Posted by Christine Blank 0 comments

CAUTION: If you are dieting, do not read this post. The mouth-watering desserts described in the following blog may cause you to run to The Dessert Lady. I have heard such great things about this dessert shop, lounge, and cafe on Church Street in downtown Orlando, and finally had a chance to try it out for myself this weekend.


The Dessert Lady is known for over-sized portions of several different delectable cakes and desserts, including: Chocolate Zuccotto, Cannoli Cake, Peanut Butter Pie, and Fudge Ripple Bread Pudding. It is best known, however, for its award-winning Carrot Cake, which includes a signature cream cheese icing and is served with creme anglaise and dark rum-soaked raisins.


We wanted to try something different, so we ordered the Flourless Chocolate Torte, a rich truffle-like torte filled with coffee liquor then warmed and served with vanilla ice cream. The combination is a dark chocolate-y ooey-gooey mouthful of some of the best stuff on earth. We also ordered the Lemon Rum Cake, which is covered with lemon cream cheese icing and toasted coconut, and includes a rum glaze. The icing was flavorful - and I love the addition of coconut - but where was the rum? I truly expected a moister cake that had been saturated with at least a little rum.


However, our overall experience in the restaurant - in a beautifully-renovated portion of the old Church Street Station - was wonderful. The atmosphere is perfect for a date night or for gathering a group of friends to enjoy a fine port or other beverage from the full bar and enjoy a long evening of conversation.

I love when Orlando Restaurant Week comes around every year. It gives us diners on a budget a chance to try upscale restaurants' food and drinks for a portion of the price! Plus there are lots of mid-priced restaurants that are participating in this year's event, from May 3 - 12.


Basically, the 30 or so eateries are offering special prix fixe menus for lunch and dinner. So, for $10 or $15, you may get an appetizer and an entree for lunch or dinner. For $25 or $35, top restaurants like Morton's Steakhouse and Taverna Opa give diners a scrumptious appetizer, entree, and dessert.


For example, Oceanaire Seafood Room's $35 prix fixe dinner features a choice of Fried Red Chili Calamari, Buffalo Shrimp, Clam Chowder, or House Salad for starters; Grilled Ecuadorian Swordfish, Prosciutto-wrapped Snapper "Saltimbocca", Black and Bleu Filet Mignon and Cashew Crusted Ecuadorian Mahi-Mahi for entrees, and Cheesecake, Chocolate Cake, and Key Lime Pie for dessert choices. At what other time would one possibly get to try all that delicious food at Oceanaire for $35?


Orlando Restaurant Week is not to be confused with Orlando Magical Dining Month, which comes around every September.
Posted by Christine Blank 0 comments