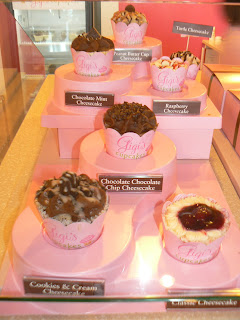 I have been dying to try Gigi's Cupcakes since the chain expanded to Orlando a few short months ago. The gourmet cupcakes look so delectable on the brand's Facebook page and a friend has recommended Gigi's gluten-free cupcakes.

I tried three of Gigl's cupcakes and one if its many cheesecakes. First to the cupcakes: I tried Wedding Cake first (the gluten-free version) because it is one of the chain's top sellers. I am not sure why. They have so many more interesting flavors, such as Blueberry Lavendar and Margarita. The cupcake was good and moist - just not different and interesting. However, the overly sweet, artificial-tasting frosting turned me off. Especially when it is piled high on the cupcake. Although Gigi's cupcake frosting looks beautiful in photos, you only need a third of it with each cupcake.

The gluten-free cake was so light and fluffy, but still had a bit of the grit that gluten-free baked goods sometimes have. Even though they are denser, I prefer Raphsodic Cooperative Bakery's gluten-free cupcakes.

Gigi's Pina Colada cupcake's frosting and cake was more interesting. Still, there was way too 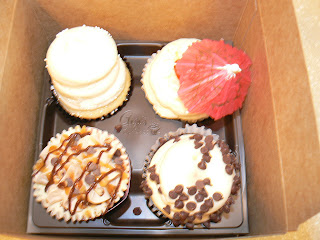 much frosting on top. Likewise, the White Midnight Magic cupcake was very yummy, but we don't need all that sweet frosting. Overall, I much prefer the gourmet cupcakes from Sweet! by Holly in Waterford Lakes and Jacksonville. At Sweet!, I love the cake itself, the frosting, and the interesting crusts and fillings that many of the cupcakes feature.

But wait, there is one piece of good news: Gigi's Turtle Cheesecake is amazing. I love the tangy New York-style of cheesecake that is both flavorful and moist. The caramel frosting on top with mini chocolate chips is one of the best frostings I have had. When you go to Gigi's, stick with the cheesecakes.

If you have visited Gigi's, do you agree with my review? Please comment below.